Yr Afonyddwch  Mawr says the European Union is the enemy of justice of those 1000 people in Catalonia who were attacked by Spanish Police and needed medical assistance for merely voting - it is an enemy of the millions in Catalonia who uphold the fundamental United Nations established democratic right of national self determination.

The CUP is a Catalan Independence Party with roots in the working class that did not sow democratic illusions about the EU unlike other bourgeois parties.


There are many lessons to be learned from the current struggle in Catalonia about the class struggle for justice and democracy in Europe particularly for Sinn Fein the SNP and Plaid Cymru all democratic illusion spreaders about EU institutions.

In fact as a sign of its political illiteracy that Plaid Cymru has called for a second referendum on EU showing its political blindness about events in Catalonia as they continue to spread the EU democratic illusion in face of the facts.

EU Treachery
Flemish view
“[The EU] have been backing the Spanish government – first on October 10, when the Catalan Prime Minister (Carles Puigdemont) was about to declare independence, (European Council president) Donald Tusk begged him to make a gesture of goodwill and Puigdemont did – he suspended the declaration of independence, so it would open a possibility of talks. But now the same Donald Tusk is just saying that Spain is [fine] to follow its repressive [course of action]. I think they are making a big, big mistake.” 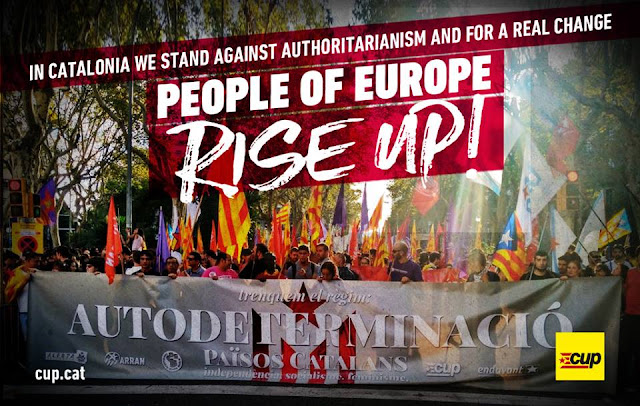