At 9.15am on Friday October 21st 1966, after several days of heavy rain, a huge slag tip above the town of Aberfan in South Wales suddenly liquified and poured down the mountain.

The black tidal wave demolished properties in its path and engulfed the Pantglas Junior School in seconds.

Of the 144 people who lost their lives that day, 116 were children. The tragedy was totally preventable.

The National Coal Board had been warned time and time again of the dangers of dumping slag in such a geologically unstable area above towns.

They chose to ignore the warnings claiming it wan't profitable for them to move the slag tips to safer locations.

After the disaster, donations from all over the world poured in for the shattered community. However, most of the money never reached Aberfan. Instead the Government gave it to the National Coal Boad so that they could move other slag tips overlooking other towns in South Wales.

The great Welsh writer and broadcaster Gwyn Thomas delivered his own moving tribute to the victims of the tragedy on the BBC the morning of the mass funeral. This is an excerpt from his eulogy 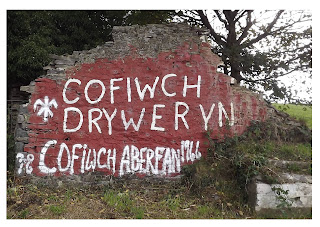 Yr Aflonyddwch Mawr says  forty nine years ago Aberfan impacted the political and social landscape of Wales and reminded many of us who had forgotten we were Welsh.

We were reminded of the consequences of British Coal Board Rule in the Mining Valleys, just has Tryweryn some years earlier had shown who ruled Wales and it wasn't the Welsh.

Posted by nickglais at 03:08 No comments:

Tryweryn : The 1959 Pamphlet of Plaid Cymru 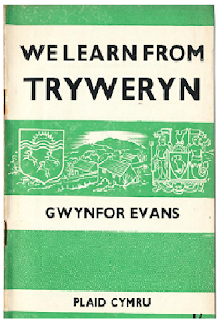 Plaid Cymru pamphlet about Tryweryn from 1959 - which mentions industrial use of water by Liverpool and not personal consumption the point made in October 19th 2015 by Lord Elystan Morgan on BBC TV Wales..

“In the 10 years preceding [the flooding of the valley], the population of Liverpool had decreased somewhat.

“The water needs of the population in terms of drinking water decreased. But Liverpool was selling industrial water to 24 other authorities, making a lot of money – and it wanted to maximise that profit.

That’s what Tryweryn was about.”

In was also in 1959 that Plaid Cymru made the fateful decision to abandon direct action on Tryweryn..

On 31 Jan 1959 Gwynfor Evans leads Plaid Cymru to reject direct action , a committee decision not of the Party.

Posted by nickglais at 02:00 No comments:

Yr Aflonyddwch Mawr welcomes this film as an honest assessment of the limits and the success's of the struggle of the Icelandic People in the never ending war with global neo -liberalism.

There are universal and not just specific Icelandic lessons to the struggle in Iceland and this film is a contribution to understanding the universal contributions.

Filmed in Reykjavik between 2012 and 2014, the documentary meets the instigators of the changes and follows the most important National Referendum in Iceland’s history.

Giving the Icelandic people the opportunity to decide whether to support a constitution that had been created through a popular grassroots movement.

Through this we explore the Icelanders’ story of their nation and the changes but also what lessons can be learned globally from their experiences.

In light of a growing international trend towards grassroots movements crossing over into mainstream politics.

This documentary is a timely portrayal of one such movement and their struggle to change the face of democracy.

Posted by nickglais at 13:10 No comments:

Tryweryn : Time to learn the lesson

Tryweryn have we really learnt the lessons - What have Plaid Cymru to commemorate  ?

Plaid Cymru is holding a rally to commemorate Tryweryn -  but what are they  commemorating  ?  Is there anything about Plaid Cymru's role at Tryweryn that should be celebrated ?

Emrys Roberts is quoted as saying

" There was a great deal of frustration and resentment by the Young Turks in the Party over Tryweryn....they intended to act and the Party had to do something to draw the sting"

So Plaid Cymru was to draw the sting of the opposition to Tryweryn and not make a sting  to defend Tryweryn .

Roberts was regarded as a man of great integrity: known and respected within the Party, included by those intent of undertaking action over Tryweryn... When people were informed that the great organiser had been appointed, they sat back and waited ...., but meanwhile, time was going on, the houses were being demolished and the people were being shifted away. By the time the people had opened their eyes to what was happening it was all over and done with.

In 2007 John Jenkins made his position on Plaid Cymru and Tryweryn clear :

Had Plaid Cymru announced at any stage prior to the valleys clearance that it had a task force which would literally fight anyone who attempted to forcibly remove the villagers and farm owners from their properties, then it would have stopped.

So what are Plaid Cymru celebrating - drawing the sting and undermining direct action to save Tryweryn ?

Truth is revealed with the passage of time - yes it is time to learn the lesson of Tryweryn.


Source of Quotations  : Introduction to Hands Of Wales by Wyn Thomas 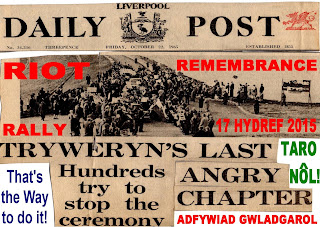 1959 PC votes for direct action at Tryweryn and asks Emrys Roberts to organise a plan of action.

31 Jan 1959 Gwynfor Evans leads PC to reject direct action , a committee decision not of the Party

1959 Gwynfor comes up with new proposals re Tryweryn

ASK FOR MONEY NOT ATTEMPT TO STOP!

1961 Elystan Morgan declares for PC to keep on about Tryweryn reduces them to being a pressure group.

1963 CYIG SIT DOWN ON TREFECHACH BRIDGE BUT WHY WHEN TRYWERYN MORE FITTING? CYIG avoiding Action as re Investiture Rally at Cilmeri 10 days before Ceremony.

1964 Emyrs Roberts (he's a mate of Pedr and Cliff Bere) demoted from organising action  at Tryweryn.

IS THAT WHAT THEY ARE COMMEMORATING.

Tryweryn is one of those moments in history when things become clear and the mist lifts and reality dawns.

The overwhelming majority of the people of Wales were against the creation of this Tryweryn dam to supply water to England with the consequent flooding of the Afon Tryweryn valley.

Even the overwhelming majority of the usually servile Welsh MP’s did not want the project to go ahead, but the people of Wales were ignored, and they were reminded who controlled Wales and it clearly was not the Welsh.

Posted by nickglais at 07:01 No comments: 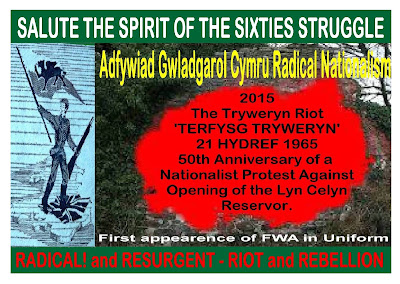 The village of Capel Celyn in the Afon Tryweryn Valley , North Wales , was ( despite many strong protests ) demolished then flooded to create a reservoir to supply Liverpool with water 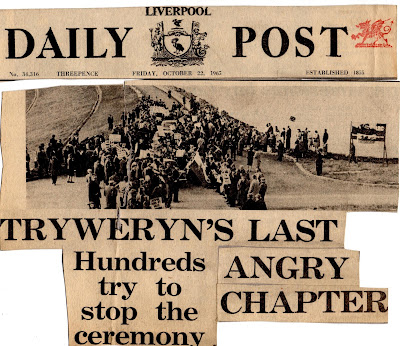 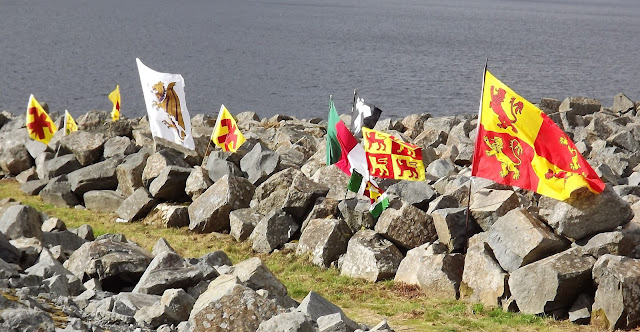