Sir Thomas Picton : Khafra Kambon told the BBC he was regarded in Trinidad as a beast. Yr Aflonyddwch Mawr says remove his picture from court of Justice in Carmarthen 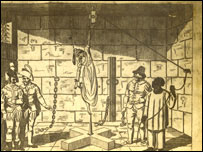 Pictoning a form of torture


"He had a very bad reputation as a governor of Trinidad," civil rights campaigner Khafra Kambon told the BBC programme.

"He was extremely harsh in the kind of punishments he meted out.     "There was a lot of terror associated with him. He was a very hard, unfeeling governor, he was regarded as a beast."  The BBC programme tells how he introduced tough slave codes, raising the number of lashes which could be given to a slave from 25 to 39.

He also introduced a 9pm curfew which slaves would receive 25 lashes for breaking.  Slaves had traditionally been given Saturdays off to grow food on their small plots or sell produce at market. Picton abolished this and fined owners who allowed it to continue.

Executions and torture were common under Picton's regime said Mr Kambon.  "You have to see the kinds of punishments that were meted out...the torture, the beheadings and the hangings. The laws were extremely harsh. The practice of slavery was extremely harsh," he added.  "For minor offences - like if you stole some sugar - they would slit your nose. If you do it again they would cut off your ears," said Kambon. 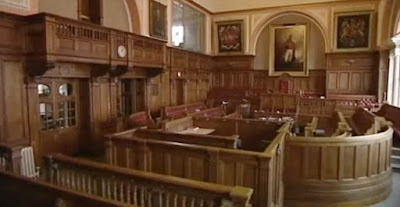 Yr Aflonyddwch Mawr call for the removal of the Picture of Sir Thomas Picton from the Carmarthen Courtroom has he is a symbol of injustice and torture and has no place in a court of justice and his picture should be replaced with the  banner of the people of Carmarthen who stormed the Carmarthen Workhouse in 1843.

Justice and Lovers of Justice are we all