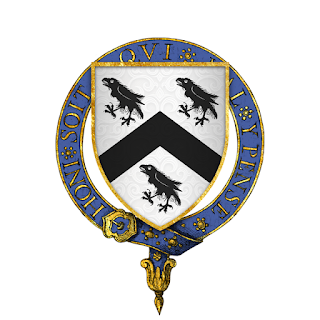 The Coat of Arms of Rhys ap Thomas


I recently had the opportunity to hear a lecture by Susan Fern on The Man who Killed Richard 111 in Carmarthen as well as to read her book of the same name.

The point of view of Susan Fern is that Rhys ap Thomas was an honourable man and a man of culture and should be up there with Glyndwr in Welsh History - after all he whispered into the ear of the King Henry V11 and was respected by Henry V111 and in all probability delivered the fatal blow at Battle of Bosworth that killed Richard 111.

Rhys ap Thomas certainly played a very important role in Welsh and English history and should be remembered - for being crucial to the victory of  Henry Richmond at the Battle of Bosworth and elevating the Richmond's and the Beauforts to the English Crown.

But was this done to help Wales, Carmarthen or restore his family fortunes ?

The more I thought about this question I saw Rhys ap Thomas like his grandfather Nicholas an acknowledged rogue but a more polished one by his enforced presence at the court in Burgundy.

Rhys ap Thomas was a  man of a brutal age and duplicity was in his blood and you only have to read his letter of loyalty to Richard 111 in Susan Ferns book to know what cultured depths of duplicity he was capable of.

His grandson  Rhys ap Gruffydd also inherited the family roguish characteristics and lost all his grandfathers estates and was executed for treason after conflict with Baron Ferrers and for insulting Anne Boleyn..

In the late 1520s, Baron Ferrers came into increasing conflict with Rhys ap Gruffydd following King Henry's grants of major power to him in Wales.

This reached a head when Rhys, with a gang of armed supporters, threatened Baron Ferrers with a knife in 1529. The two men were allowed to air their grievances, but Rhys's family continued to stir up trouble. Eventually Rhys was charged with treason, convicted and executed.

From that point on Rhys ap Thomas family was written out of history - what some century later became known as Tudor history.

Perceptive historians like Gwyn Alf Williams always saw the Richmond/Tudors as playing at being Welsh when it suited their interests.

Gwynfor Evans correctly distinguished between the Welsh form and English content of the Tudors in his book Land of My Fathers.

If the Richmond/Tudors had merely erased Rhys ap Thomas who was the morning herald of the uchelwyr - the Tudor gentry from history that would not be a major problem today.

However  the Richmond/Tudors bought and paid bards and sycophantic historians like David Powel to falsify Welsh History.

David Powel published in 1584, The Historie of Cambria, now called Wales, was the first printed History of Wales

It also popularised the legend that Prince Madoc had discovered America in about 1170, a tale used to justify English encroachments on the territory of Spanish America (for example in Hakluyt's Discourse on Western Planting).

David Powel was A Tudor Taff for Colonialism and Empire.

The Richmond/Tudors were also keen to erase any Welsh Royal bloodline and hunted down descendants of the Welsh Royal House as well as re writing history.

The crime of the Richmond/Tudor's was the killing of Welsh History and replacing it with a Cambrio- Brit History not the killing of Rhys ap Gruffydd  just another land owning rogue in the Rhys ap Thomas family tradition.

What was the position of the ordinary Welsh people the peasantry during this Richmond/Tudor time not the privileged Rhys ap Thomas bloodline ?

"When Henry Tudor became King, Wales like England, had not yet recovered from the effect of the great population slump which had occurred in the middle ages.

Villeinage had virtually disappeared , labourers and small farmers were enjoying a relatively high standard of living, and so slack was the demand for land that rents were low and some holdings unoccupied for want of tenants.

Within a couple of generations the situation had dramatically changed. There was a dramatic increase in population which resulted in severe inflation, the prices of some foodstuffs increasing six fold during the course of the sixteenth century, land hunger, a substantial increase in the proportion of landless people in society, a labour glut and relatively low wages.

Many peasants also found that, because land was becoming a more valuable commodity, they were subjected to a determination to oust them from their farmlands or to increase in their rents.

For them it was as George Owen remarked "A new world"..

It was a good time for the collaborating Welsh Gentry  the uchelwyr  the supporters of the Richmond Tudor Monarchy.

These collaborators would later morph into our present day crachach but it was a very hard "new world" for the ordinary people in this new Richmond/Tudor Wales.

The uchelwyr came from blood relations from the old Welsh tribal bonheddwyr or breyr - so we have a line of oppressors from past to present crachach who have been taken as representing Wales on our behalf.

Is it not time for the authentic Wales of the Gwerin to step forward in history ?

The Rhys ap Thomas lecture in Carmarthen reminded me that the past is very much the present  - where a small section of Welsh collaborators did well under the Richmond Tudors but the vast majority Welsh People suffered impoverishment and growing landlessness.

The Crachach have found a new hero and the Gwerin a new villain in Rhys ap Thomas who brought the oppressive Richmond Tudors to power and we have two different versions of history that of the people and that of the elites.