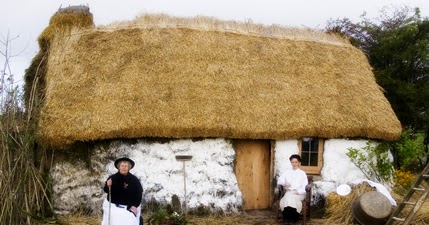 Towards a Peoples Socialist History of Wales .

Prior to the Owain Glyndwr led war of Welsh Independence 1400 – 1416 – 1421 Welsh Land was owned by Native and Anglo – Norman Lords. The 1282 Conquest of Wales and subsequent Colonial Settlement established a new Colonial and Collaborationist Order much of Welsh Land was made over to the English Conquistadores and the new Borough Towns that were associated with English Castle rule.
In some areas as in Y Berfeddwlad (Denbighshire) and on Ynys Mon there was large scale ethnic removals of the Native Welsh as had occurred in earlier times in South Penfro by the Normans who had brought in and resettled Flemish Settlers.
However, a broader and larger Colonial settlement would not occur due to fact that the English were recovering land from the sea on their long East Coast and maybe English population had taken a dip.
Further has much of the newly conquered land of North West and along the West Coast was not exactly that profitable to English Lords the local petty Welsh Chiefs were allowed to retain as long as they paid their taxes and made themselves willing servants of English Rule and the new Colonial Collaborationist Order and thus for the coming 100 years plus Wales was to be, I guess much same as ‘Vichy France’ during WWII.

This does not mean that Wales was totally won over as by 1294 the so called Madog Revolt proved not only were there still some former Welsh Nobility and lesser Chiefs peeved with the ‘New Order’ but so too were many Free Tribes Men as well as their Bond population now being made to worker harder for less to help their native rulers pay their taxes.
In a native economy that was not used to ‘Money’ the collection of taxes often unpaid often meant the Tax Collectors turning up with a body of troops to collect what was deemed as being owed in kind.
This meant basically taking the food out of ones mouth as Cattle, Pigs and Chickens were taken but if this was not enough to provoke a Welsh Bad Temper then the imposition of English Laws and then Conscription to fight in England’s Royal Wars altogether was to create the tension and the circumstances that would give rise to the first Welsh National Revolt that may be seen as also the first popular War of National Liberation in Wales giving a fore taste of what was to come with The ‘Glyndwr War’ over a century later.
Tax collection in hard times as in 1315 – 16 with the Llywelyn Bren rebellion and 1344 – 45 troubles in Northern Wales would also lead to a rise in the banditary of they who became known as ‘Adar y Greim’ (the Birds of Crime), Outlaws who made the vast forests of Wales their abode during the 14th Century.


This English rule with it’s oppression and tyranny over these  years promoted a growing discontent which with a ‘folk memory’ of traditional legend and myth helped greatly to create a national identity of an ‘oppressed people’ waiting for a day of deliverence.
Their deliverer ‘Mab Darogan’ was to be Owain Glyndwr and a number of Native Welsh Lords and landed Gentry who on by 16 Medi 1400 had decided they too had a guts full of English Rule and declared for a War of Independence.

Owain Glyndwr
However, to fight such a war an army was needed and in a land of about just 550.000 population where many of it’s old Noble and Gentry class had sold out and made themselves comfortable as Collaborators this could prove the undoing of the war that was about to be but for one factor and that was over the 100 years previous the coming into existance of a Colonial Underclass of impoverished native Freemen and Welsh Bond familes and Anglo – Norman Serfs as well as those who had risen to be made Tennants of the Anglo – Norman Lords of the Land.
This ‘Colonial Underclass’ which included those with description as being ‘Workers’ such as Ieuan ap Bleddyn of Ruthin who joined Glyndwr’s first great raid of 18 – 24 September were to become the Foot soldiers of the War for most part quite a large Peasant Army with out which the War would not have been sustained for as long as it was.

No doubt trained by Welsh Mercenaries returning from foreign wars on how to be an effective Infantry and by ‘Adar y Greim’ in the ways of Guerrilla Warfare.

The ‘Glyndwr War’ was thus as much possibly to some great extent a ‘Peasants War’, take for example Lord Grey he had 184 serfs  at start of the War but only 8 were left post 1416.
Now multiply that across the land regards the enslaved Under Class fleeing ther Lords land to join the war, in a Peasants Army. I cannot see how else Glyndwr could have possibly risen such as the great army to take on a mighty English Military Machine, books there are aplenty about the Glyndwr ‘War of Independence’, suffice I say that we may also regard it as a War of National Liberation much a popular peasants uprising and the shape of much to come from a people who had learnt to fight back even if only armed with a Pitchfork or Pike.
At eventual conclusion of this war, for the ‘Colonial Underclass’ there was no returning for most to normality as many would still have a rebels price on their head as Robat ap Doe brought as a ‘Rebel’ to Welshpool Castle in 1421 and there hung as many must have been unless once again taking to the woods to become Outlaw Rebels of ‘Y Gwerin Owain ’ who would as ‘Banditti Cambria’ continue a Welsh Rebel Resistance up to Tudor Times untill following the last Welsh Nobles Revolt of 1529 and prior to the 1536 Act of Union, the Tudors sent into Wales the ‘Hanging Judge’ Rowland Lee to pacify the land as the Tudors were to cull Welsh Ponies so to the last remaining ‘Outlaw Rebels’ were to be culled as well.

However, many of Glyndwr’s ‘Peasant Army’ and their families would escape ‘English Injustice’ and avoid further oppression and tyranny by escaping to the margins of the uplands and lesser desirable Common Land.
In these margins of uplands and hidden valleys they would set up their Tai Unnos and become a relatively ‘Free People’ as example of those who became known as the Red Bandits of Dinas Mawddwy.
For much of the 16th Century many of these People’ were left to get on with it, their land unwanted as the Gentry had better choice pickings in ripping of the rewards of the Reformation and Robbing blind the riches of the Medieval Religious Orders whom should be regarded as no more than a form of early European Enterprise of Corporate Capitalism
Over time the occupation of the margins become more opportune for those who would become Fisher folk along the marginal coast along Pen Lleyn.

Workers in lead mines of Ceredigion and in small slate Quarries as ‘Vagabond Quarrymen’ in Gwynedd or Lime stone Quarrymen in the South to supply Lime for a growing Iron Industry.
In these cases often as not ‘Tai Unnos’ Townships were established, often allowed and even encouraged as in Gwynedd were the poor were allowed to set up Tai Unnos and become small holders as thought better than the expense of rate payers having to fund a local Work House.

Thus for a little while, little trouble with each to it’s own the afore described peasantry just about managing whilst the Welsh Gentry got rich on the growing British Empire with a fortune to be made from Tobacco and Sugar along with it slaves. 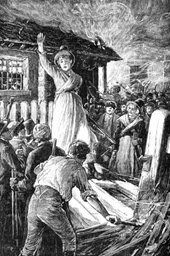 ‘Rebecca Riots’
But this would all lead post Tudor Times to the urbanisation of Britain and the early development of Industry as Wollen Mills and with it a population boom that required to be fed in a much greater and more efficient manner and to this end arises the Enclosure laws that would greatly increase throughout Britain a landless class of people forced to become ‘wage slaves’ or try and stick it out as best as possible as still a ‘Free Peasantry’ but as often as not only if they took to becoming the ‘People of the Pitchfork’ and resisted the enclosure of their land.

Such resistance is in Wales, generally a little known story in public knowledge or imagination unless it is that of the ‘Rebecca Riots’ which as an appeal to the rural religious Small Farmer V Anglicised Gentry.

The inheritance of our present day ‘Crachach Newydd’ but as far as far as the Resistance of the ‘Underclass’ little is known and something needs to be done about that but what, any ideas that will help towards producing and making better known a Peoples Socialist History of Land and Liberty Struggle.
Gethin ap Gruffydd
Books to read: