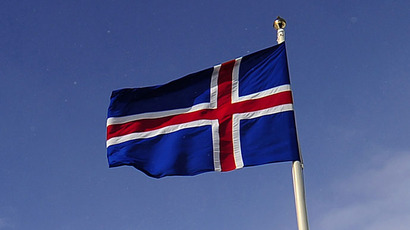 Yr Aflonyddwch Mawr admired the good sense of the Icelanders when they let their own people decide on whether or not to take on the debt created by the fraudulent activities of Icelandic banks.
Being outside the European Union unlike Greece and Italy and Spain they could pursue economic policies that were to the benefit of their people rather than of the bankers and oligarchs  and recovered from the 2008 crash faster and better than most other countries..
Therefore taking  the decision to drop its bid to join the European Union makes a lot of good sense - which what we have come to expect from Iceland and its People rather the nonsense of the European Union highlighted so well in the current stand off with Greece where the European Union are trying to force the Greeks to continue with privatisations or face a banking liquidity crisis.
It is time to emulate The Icelanders and reject the current European Union of Finance Capitalists and Oligarchs and build a Union Of European fighting People against this parasitic elite.
Wales  must catch up with the reality of the current European Union and its Institutions like the European Central Bank and not mistake  this bitter enemy for a friend.
Iceland has dropped its bid to join the European Union, the Foreign Ministry in Reykjavik says. The announcement follows pledges made by the country’s euro-skeptic government since winning the 2013 election.

Gunnar Bragi Sveinsson, the Icelandic foreign minister, said in a statement that he had informed Latvia, the current EU president, and the European Commission that his center-right government had decided to withdraw its application, which was submitted six years ago.

“The EU and Iceland have discussed the country’s position on the status of its bid to join the European Union,” the statement reads. “The government does not intend to resume preparing for EU membership.” #

Prime Minister Sigmundur Davið Gunnlaugsson talked of formally withdrawing the bid in January.
“Participating in EU talks isn’t really valid anymore,” PM Gunnlaugsson told Reykjavík Grapevine at the time. “Both due to changes in the European Union and because it’s not in line with the policies of the ruling government to accept everything that the last government was willing to accept. Because of that, we’re back at square one.”

Iceland applied for EU membership in July 2009, at a time when the global economic crisis was unravelling. By February 2010, the European Commission produced a favourable answer and accession negotiations began in July the same year.

The negotiations came to a stalemate in April 2013, when the election in Iceland was won by the centrist Progress Party, and the conservative Independence Party. When Progress Party’s Gunnlaugsson became prime minister, he froze negotiations with the EU in May 2013.

One of the major issues stalling an agreement was fish catch quotas insisted on by Brussels, something the Icelandic Fishing industry would never have agreed to.

The small island nation, with a population of 325,000, is and will still be a member of the European Economic Area (EEA), the European Free Trade Association (EFTA), the Schengen area and is an EU partner promoting cooperation in northern Europe – meaning it gets many of the advantages of being a full member without many of the negative aspects of centralized EU laws and planning.

If in the future Iceland decides to join the EU, this will be decided only by a referendum, the government said. Iceland will continue to comply with the terms of the EEA and to cooperate with the EU as it has done previously.