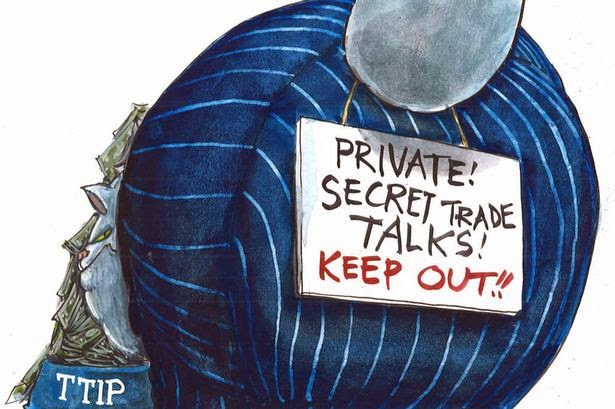 GATT – the General Agreement on Tariffs and Trade – had come into effect as early as 1948. Its stated purpose was the “substantial reduction of tariffs and other trade barriers and the elimination of preferences, on a reciprocal and mutually advantageous basis”.

It was not universally accepted, but it survived until 1994, being replaced the following year by the World Trade Organisation. But GATT was a multilateral agreement – not a specific US-EU one. NAFTA – the North American Free Trade Agreement between the US, Canada and Mexico – followed seamlessly on from GATT, being signed into existence in 1994.

Proposals for a specific US-EU trade agreement initially named TAFTA – the Transatlantic Free Trade Agreement – also date from the early 1990s, but negotiations began only in 2013 for a rebranded Transatlantic Trade and Investment Partnership – TTIP[6]. If approved, the agreement would be the biggest trade deal ever. The US and EU together account for 40% of global GDP.

From the start the meetings between negotiators have been held in secret. It was not until the negotiating mandate, agreed by the European Council on 17 June, 2013, was leaked by some German Green MEPs that the public – and even members of parliament in the EU member states – were able to see what TTIP was all about.

A copy of the mandate can be accessed here.[7] There is a warning on the first page: “NB: This document contains information classified EU RESTRICTED whose unauthorised disclosure could be disadvantageous to the interests of the European Union or of one or more of its Member States”. The “interests of the European Union” referred to here appear to be those of the institutions only – not of its 500 million citizens.

The mandate is a wonderful example of what Rudolf Steiner meant by “empty rhetoric”. The preamble refers to “common principles and values”, including “shared values in such areas as human rights, fundamental freedoms, democracy and the rule of law”. It nominally commits the parties to “sustainable development and the contribution of international trade to sustainable development in its economic, social and environmental dimensions, including … full and productive employment and decent work for all, as well as the protection and preservation of the environment and natural resources”. Glorious window-dressing.

If this were true, one would expect representatives of human rights, environmental, labour and other organisations to be at the negotiating table, or at least be able to make formal representations.

In fact, between January 2012 and April 2013, wehen the mandate was being worked on, the EU Commission met business lobbyists behind closed doors on 119 occasions; meetings with trade unions and consumer protection organisations occurred only 11 times.

The mandate also claims that “the Parties will not encourage trade or foreign direct investment by lowering domestic environmental, labour or occupational health and safety legislation and standards” – but there is cause to doubt the strength of the partners’ commitment to these laudable aims, for very good reasons. The proposals include something called ISDS – “Investor-to State Dispute Settlement” – probably the most contentious part of the agreement. The negotiations “should aim to include … fair and equitable treatment, including a prohibition of unreasonable, arbitrary or discriminatory measures” and “full protection and security of investors and investments”. This would be ensured by the provision of “an effective and state-of-the-art investor-to-state dispute settlement mechanism”. Companies and/or investors who felt that their legitimate right to make a handsome profit on their investment or trading deal had been frustrated or denied the – for example, by a change in government policy – will be able to sue the government in a special court before a panel of three private lawyers, whose decisions cannot be appealed.

Pared down to its essentials, the rhetoric means that investors must be freed from the fear of losing money on their speculations, and the expected profits of companies entering into contracts anywhere within the US and EU must be guaranteed. And we thought “free market” capitalism was about taking risks!

Fortunately, ISDS is not an unknown quantity. It is already in use in other trade and investment agreements and it has acquired an unenviable track record. An excellent study by the Seattle to Brussels Network entitled “A Transatlantic Corporate Bill of Rights” notes that “US and European companies have driven the investor-state litigation boom of the past two decades. By far the largest number of the 514 known disputes initiated by the end of 2012 were launched by US investors, who filed 24% of all cases. Next in line are investors from the Netherlands (50 cases), the UK (30) and Germany (27). Together, investors from EU member states have filed 40% of all cases.
EU and US companies have used these lawsuits to challenge green energy and medicine policies, anti-smoking legislation, environmental restrictions on mining, health insurance policies, measures to improve the economic situation of minorities and many more. The following are just some of the bizarre judgements that have resulted:

- Philip Morris V. Uruguay and Australia: through bilateral investment treaties, US tobacco giant is suing Uruguay and Australia over their anti-smoking laws. The company argues that warning labels on cigarette packs and plain packaging prevent it from effectively displaying its trademark, causing a substantial loss of market share.

- Vattenfall V. Germany: in 2012, Swedish energy giant Vattenfall launched an investor-state lawsuit against Germany, seeking €3.7 billion in compensation for lost profits related to tow of its nuclear power plants. This followed the German government’s decision to phase out nuclear power after the Fukushima nuclear disaster.

- Achmea v. the Slovak Republic: at the end of 2012, Dutch insurance company Achmea was awarded €22 million in compensation from Slovakia. In 2006, the Slovak government had reversed the health privatisation policies of the previous administration, requiring health insurers to operate on a not-for-profit basis.

- Corporations against Argentina and Greece: when Argentina froze utility rates and devalued its currency in response to its 2011-2002 financial crisis, it was hit by over 40 lawsuits from companies like CMS Energy (USA) and Suez and Vivendi (France). By the end of 2008, awards against the country had totalled $1.15 billion. In May 2013, Slovak and Cypriot investors sued Greece for the 2012 debt swap which Athens had to negotiate with its creditors in order to get bailout money from the EU and the IMF.

- Lone Pine v. Canada: on the basis of NAFTA, US company Lone Pine Resources Inc. is demanding $250 million in compensation from Canada. The ‘crime’: the Canadian province of Quebec had put a moratorium on “fracking” in response to concerns about the environmental risks from this technology.

Other specific fears are that American companies, including Monsanto, will use ISDS to force EU governments to accept GM products and agriculture, chlorinated chickens and growth hormone-treated beef. Public procurement is another target: “The Agreement will aim at enhanced mutual access to public procurement markets at all administrative levels (national, regional and local), and in the field of public utilities … ensuring treatment no less favourable than that accorded to locally established suppliers”. This would enforce the opening up of many public services to private takeover.

Fears that the European Commission’s own policies could lead to the privatisation of all public water companies across Europe led campaigners to launch a European Citizens’ Initiative – a new transnational democratic right included in the Lisbon Treaty.

In effect, it is little more than a petition to the European Commission to consider a proposal i.e. it does not in any way force the Commission to act, even when an initiative satisfies the extremely demanding conditions: a minimum of 1 million signatures of support to be collected within 12 months and from a minimum of 7 EU member states.

At an estimated cost of 1€ per signature, it is an expensive business for campaigners.

Nonetheless, the Right2Water ECI exceeded expectations, collecting an amazing 1,884,790 signatures under the slogan: “Water is a human right”.

This put considerable pressure on the Commission, which announced that the provision of water services had been excluded from the Directive on the awarding of concession contracts.

However, were TTIP to be adopted, it is likely that this would be merely a temporary reprieve, as public providers could be threatened with punitive damages under ISDS. Monsanto, which earlier announced that it was pulling out of Europe, may also be waiting to use TTIP and ISDS.

Nonetheless, people and civil society organisations on both sides of the Atlantic have woken up to the threat from TTIP and have begun to take action to preserve some measure of sanity in international trade. On 15 May, 240 demonstrators were arrested in Brussels next to the European Business Summit venue. Four days later, a letter signed by more than 250 civil society organisations was sent to EU Trade Commissioner Karel de Gucht calling on the Commission to open up the TTIP negotiations to public scrutiny.

Director of Friends of the Earth Europe, Magda Stoczkiewicz, said: “These negotiations have the potential to impact upon many aspects of life for citizens here and in the US, from food and chemical safety to the environment.

The European Commission cannot remain deaf to civil society calls for transparency – people have the right to know what’s at stake”.

On the same day, 650,000 signatures collected online and in the street in Germany against TTIP and for the preservation of democracy were handed to the leading candidates for seats in the new EU Parliament. Backed by more than 240 European organisations, a European Citizens’ Initiative to demand the repeal of the TTIP negotiating mandate was launched in September, but the Commission has rejected it on what appear to be flawed legal grounds.

The ECI coordinating committee intends to appeal the decision at the European Court and in any event to continue campaigning against a deal that would only reinforce a predatory capitalism that has come more and more to embody the “bushonomics” of G.H.W. Bush:

“The continuous consolidation of wealth and power into ever fewer, ever tighter, and ever righter hands”.