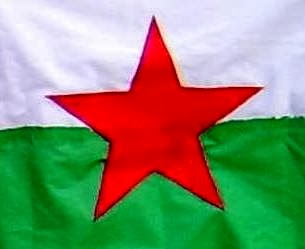 Yr Aflonyddwch Mawr makes available latest Press Release of the "Save our Mural" Campaign and calls for maximum support for protest on 5th October at 12.00pm at John Frost Square, Newport .


Following the recent decision by Welsh Preservation group, Cadw, not to list Newport's Chartist Mural for preservation, the local council has now announced that it plans to knock down the artwork to make way for a £100m commercial shopping scheme using £1.5m of funding not from the scheme’s London developers, Queensberry Real Estate, but from the Welsh Government as part of a wider package of support approved by Economy Minister, Edwina Hart AM.

According to Councillor Bob Bright, leader of Newport City Council: “The first phase will involve the demolition of shops in the John Frost Square area [where the mural is located] … We are grateful to the minister and the Welsh Government for providing this funding…”
However, in its listing refusal, Cadw acknowledges that the 1,500 sqft mosaic, commissioned in 1979 to commemorate the Newport Rising, is: "a striking piece of art commemorating events of historical significance to Newport." In this refusal decision, Cadw also recognises, "the significance of the mural as a major piece of public art providing an important connection to the city's heritage," and goes on to confirm that the council's own consultants, Mann Williams and Cliveden Conservation, "established that relocation may be technically feasible".

Local pressure group, 'Save Our Mural', are therefore planning a re-enactment of the Chartists’ 1839 march on Newport, only this time not armed with pikes and muskets but instead a 3,500-signature petition addressed to the council’s new Chief Executive, Will Godfrey.

Describing the demonstration as an "insurrection day", Save Our Mural's campaign chairman, Peter Rawcliffe, states: "Newport Council's announcement of their plans to destroy our much-loved mural is in direct contradiction with the personal pledge made ten weeks ago by their new CEO, Will Godfrey, to myself and my fellow campaigners that he would do everything he could to relocate the mural if it was technically feasible to do so."

“There are lots of questions Newport Council need to answer," Rawcliffe continues. "Why are they now saying it will cost £600,000 to relocate our mural when previous estimates were placed at £200,000? And how can they go to a single tender for what is potentially a £600k contract when EU Law and the government’s Best Value Unit prohibit this? Why hasn’t the council invited a competitive tender from Oliver Budd [son of the mural's now deceased creator], who took only one week with his partners to safely remove and store Birmingham's huge JFK mural. We just feel so disenfranchised by a council that, at best, suffers from a complete lack of imagination and, at worst, has a complete disregard for the public over this issue."

The Save Our Mural campaign’s frustrations are borne out by Plaid Cymru shadow Heritage Minister, Bethan Jenkins AM, who was prompted on 19th September to write to the council requesting that it, “listen to local people and campaigners who are against the demolition of the Chartist Mural in Newport.” In her letter, Jenkins goes on to observe: “Surely there can be a way to save this important mural and push ahead with the new retail plans? After all, the Chartists play a vital and important role in our heritage as Welsh people, and I believe that by demolishing this mural, it will send a very negative message about their legacy and importance to Newport and to Wales.”

Local mosaic artist and campaigner, Stephanie Roberts, adds: "The Council's recent PR statement says that, as part of the £100m commercial development plans, 'The demolition [of a car park] cannot take place without putting the integrity of the chartist mural at risk,' and so rather than at least try, their solution is to destroy the mural altogether - it's complete madness. And why was the preservation of our mural never made a proviso in the first place when granting planning permission to the developers, Queenberry?"

Roberts concludes: "All we are asking is for the mural to be incorporated into the design of the shopping centre or its environs. This would signal a clear message to the public that the council and the London developers are socially aware and respectful of the heritage of not just this Welsh city but indeed the whole of Wales," an opinion that seems to be supported by presenter Hugh Edwards who tweets: “The mural marks an event of truly national importance."

Commenting on the council’s announcement of its plans to destroy the mural, Mohammad Asghar AM (Regional Welsh Assembly Member for South Wales East), said: “We need to find a swift solution to save this mural for the enjoyment of future generations without delaying the long overdue redevelopment of Newport city centre,” a position backed by the Welsh Assembly Tory group that states the party’s Suzy Davies AM was disappointed with the decisions by the council and Cadw which “demonstrate a lack of appreciation for Welsh heritage.”

Prof Brian Goodey BA, MA, Dip CD, Dip LA, GMLI, FRGS, FRSA (Emeritus Professor, Urban Landscape Design at Oxford Brookes University), writes of the Newport Chartist Mural: "If suggestions as to its destruction are correct, then in less than a generation a town, now a city, seems willing to dispose of a public work of art which marks a key event in British history. Regardless of attitudes towards its aesthetic qualities (and public art always receives a rough time after the initial decision) possible destruction seems to reflect an official willingness to discard this important public reminder of the human qualities and conflict that made Newport what it is.”

In his own public statement, Oliver Budd observes: “Whilst I fully understand Newport's need for modernisation and re-development to stimulate the commercial centre of the city, it is sad that it necessitates the loss of this landmark work. The great tragedy is that like other past artworks, buildings and monuments that have been removed from our towns and cities, you look back in years to come and wonder why more wasn't done to retain these unique cultural aspects of our built environment, when all that is left are photographs and memories.”

Yet Bethan Jenkins AM concludes her letter to the council’s CEO, Will Godfrey, with a less fatalistic demand: “I urge you to reconsider your decision.”

Note for Editors: The Chartist movement prompted one of the most important political reforms in the UK that acknowledged levels of equality previously denied to many. Created by Kenneth Budd, using more than 200,000 pieces of broken tile and Venetian smalti, the Chartist Mural celebrates the lives of those lost on that fateful day in Newport on 4th November 1839. The mural offers a unique insight to the proud history of Newport, celebrating the democracy won by its ancestors for the whole of Great Britain. The demolition of this piece of highly accessible art in the name of development is a denial to the historical facts that it so clearly portrays, and flies in the face of public opinion.
Contacts:

Zennis, Communications Officer, 'Save our Mural'.